Social media has been flooded with tributes to beloved busker Thomas O’Halloran after the pensioner was brutally stabbed to death in broad daylight earlier this week.

The hashtag ‘RIP Thomas’ was trending on Twitter for hours on Wednesday night as people were quick to pay their respects to a warm and charitable man, with the online community sharing their raw outpouring of grief.

Mr O’Halloran, 87, had spent many afternoons raising money for charitable causes in the West London area of ​​Greenford before he was stabbed to death in what detectives believe so far be a street robbery gone wrong.

Flowers and cards were left outside the Tesco hypermarket where the pensioner was last seen alive less than 20 minutes before his fateful final trip after a day of fundraising efforts.

Friends suspect the well-known community fundraiser may have been followed by someone ahead of the stabbing who ‘watched him collect his charity money’ this afternoon before launching his deadly attack .

Mr O’Halloran, 87, was riding a mobility scooter in Greenford, west London, when he was stabbed to death earlier this week. 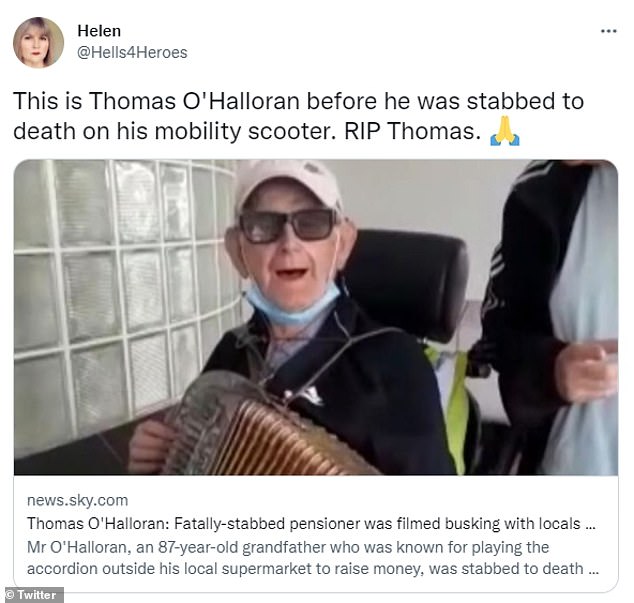 The hashtag ‘RIP Thomas’ was trending on Twitter for hours late Wednesday night as people were quick to pay tribute to a warm and charitable man, with the online community sharing their raw outpouring of grief.

A well-known face in the local community, residents and those who crossed paths with Irish-born Mr O’Halloran were devastated at news of his death.

Thousands of people took to Twitter to remember the family man whose enthusiasm for charitable causes in life knew no bounds.

Amateur band The Reels, who shared a clip of when they met Mr O’Halloran as he played his accordion outside Tesco, tweeted their disbelief last night.

They wrote: “I can’t believe I’m writing this. I met this wonderful man Thomas O’Halloran in June, playing music outside Tesco in Perivale.

“He was 87 years old! This gentleman was stabbed to death on his mobility scooter in broad daylight yesterday afternoon in Greenford!’

Others simply shared images of music lover Mr O’Halloran during his fundraising pump with the trending hashtag RIP Thomas.

Meanwhile, a section of online commentators were furious at the attack and openly questioned the ‘evil creature’ who stabbed the pensioner to death.

Broadcaster Dominique Samuels tweeted: “What kind of evil creature stabs an innocent old man in the 80s on a mobility scooter?”

“There is too much darkness in this world. RIP Thomas.’

Another person asked, “What kind of horrible world do we live in? A poor old man stabbed to death in a mobility scooter.

‘How much less can he go down? Unfortunately, Thomas O’Halloran is not the first…and will surely not be the last victim.” 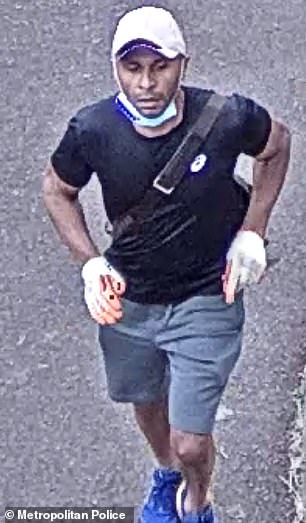 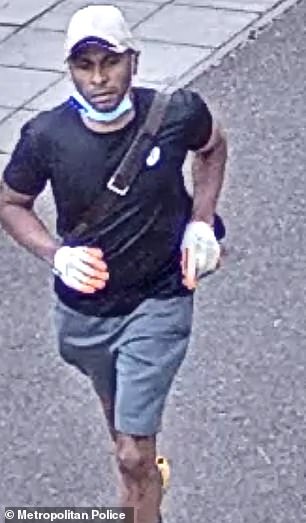 Detectives are reportedly on the hunt for an alleged ‘prolific shoplifter’ who is wanted for questioning in connection with the fatal stabbing of beloved 87-year-old busker Thomas O’Halloran, who was killed in broad daylight following ‘street robbery gone wrong’ in row over pensioner’s charity money 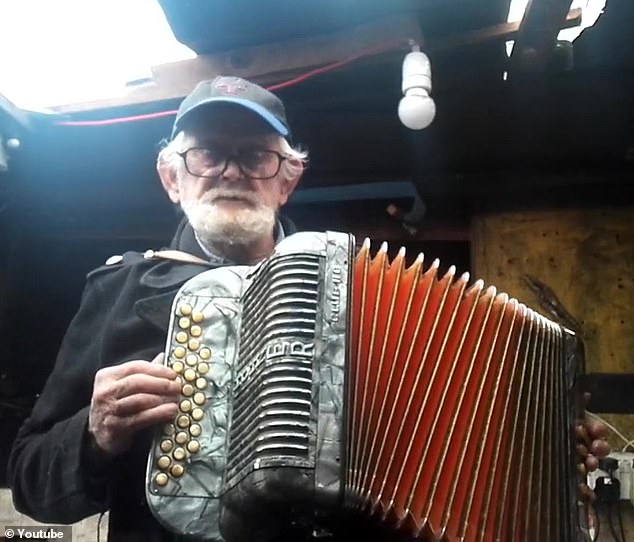 Mr O’Halloran, 87, was riding a mobility scooter in Greenford, west London, when he was stabbed to death yesterday 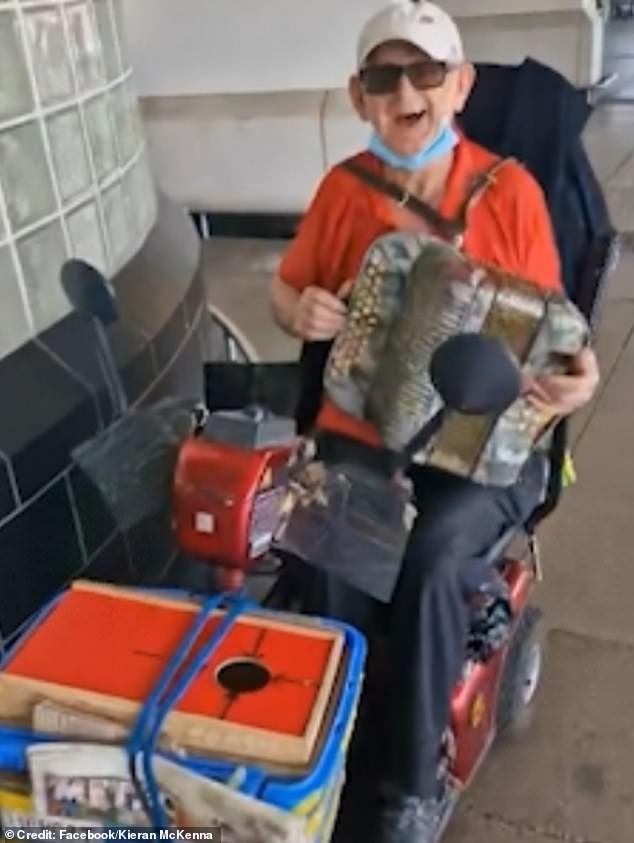 Mr O’Halloran, 87, had spent many afternoons raising money for charitable causes in the Greenford area of ​​west London before he was stabbed to death in what detectives believe so far be a street robbery gone wrong. 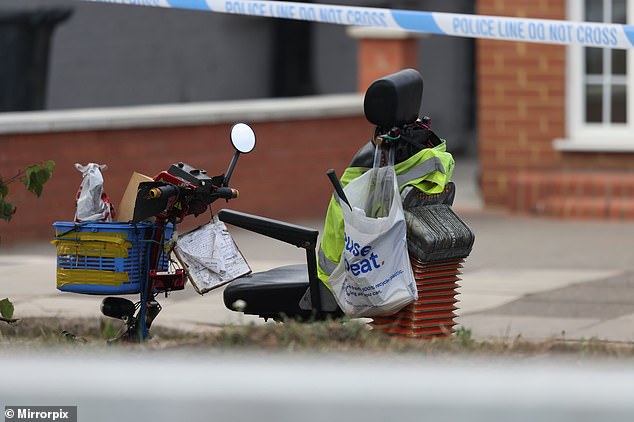 A police cordon has been put in place around Mr O’Halloran’s mobility scooter (above) which was left at the scene of the fatal stabbing in Greenford, west London yesterday

Friends and family were quick to praise the humble life of a “very good and kind” man who touched the hearts of everyone he met.

A friend, who had known the retired engineer for more than 20 years, told MailOnline: ‘Someone must have watched him collect his charity money and then followed him.

“An elderly man on a mobility scooter is an easy target and you wouldn’t expect him to fight much. It is a heinous crime.

Relatives of Mr O’Halloran paid a powerful tribute to the beloved busker with the pensioner’s grandson Joey, 20, telling MailOnline of his family’s ‘complete shock’ at the horrific murder.

He said: ‘The family are still trying to figure out what happened, it’s a complete shock. My dad called me this morning, he was very upset and didn’t talk much. I just don’t understand why anyone would do that to a helpless old man.”

It came as chilling footage showed the fateful final journey of a beloved 87-year-old pensioner who was stabbed to death in a ‘failed robbery attempt’ after spending the afternoon doing the party to raise funds for the victims of war.

Adjusting a blue charity collection box, sprayed with yellow paint to represent the Ukrainian flag, Thomas O’Halloran, 87, walks past a Tesco store in Greenford, west London, minutes before he was brutally stabbed .

CCTV footage shows the beloved busker 20 minutes before he was attacked in broad daylight in an alleyway off the busy A40 Western Avenue, in what is believed to be London’s 64th lawless murder so far now this year.

The footage was taken at 3.48pm as he walked past a newsagent near the hypermarket. Police were called 18 minutes later at 4.06pm after Mr O’Halloran was ambushed on his way to Greenford station a mile away.

The busker was fatally attacked in Greenford, west London, on Tuesday while raising money for war victims in Ukraine in the latest alleged murder to shake Britain’s anarchic capital that has sparked the six murder investigations in the last four days alone.

Officers released footage yesterday of a ‘dangerous individual’ seen fleeing the scene of the attack on Mr O’Halloran, 87 – from Ennistymon in County Clare, Ireland – and said that officers wanted to identify him urgently.

Local security guards at the Tesco hypermarket, where Mr O’Halloran frequently walked outside, warned the alleged knife had been kicked out of local shops, suspected of shoplifting on numerous other occasions .

Police, who described the murder as unprovoked, would investigate the robbery as their primary line of inquiry. The Metropolitan Police did not immediately respond to request for comment.