A number of entries on his visits to Donegal are contained in a new book on the work diaries of Michael Collins.

“Days in the Life, Reading the Michael Collins Diaries 1918-1922” is published by the National Archives in partnership with the Royal Irish Academy.

From 1918 to 1922, “The Big Fella” Michael Collins kept working diaries of his busy revolutionary life.

They are a collection of hasty notes, needed lists, names and appointments, things to do and things not done.

A spokesman for the publishers confirmed to the Donegal Daily that there were mentions of Donegal in terms of traveling around the country, “raising money for the Dáil Fund in 1919, as well as canvassing for the elections of 1918”.

In this book, Collins biographers Anne Dolan and William Murphy capture the nature of this new source for Collins.

They reflect on how newspapers change what we already know about him and how they challenge us to think about his life.

The diaries begin with Collins, one revolutionary among others; they end in 1922 with Collins as the most powerful figure in Ireland.

They begin with Collins, a single man; they end up with him about to get married. The authors present thematic reflections on what the diaries reveal of his transformed life.

The original diaries of Michael Collins at the National Archives.

Echoing the content and texture of the diaries, the mix of the intentional and the random that are days in a lifetime, this book uses the diaries to consider the critical moments of Collins’ revolution.

Because they are also the diaries of his daily life, the book examines very particular episodes, the curious and ordinary entries, which allow us to see him from more angles than before.

Rather than offering the final piece that will solve Collins’ puzzle, the newspapers are asking new questions to ask.

Minister for Tourism, Culture, Arts, Gaeltacht, Sport and Media Catherine Martin spoke about the release of the book,

“I am delighted to support the publication of this new book as part of the 2012-2023 Centenarian Decade program to mark the centenary of the death of Michael Collins in August 1922,” said Minister Martin.

“It’s a special book based on diaries never before seen by the public.”

“I was honored to be present at Michael Collins’ birthplace in Woodfield, Cork, last November when the diaries were handed over to the National Archives by the family of the late Liam and Betty Collins, nephew of Michael Collins. “

In the months that followed, the National Archives worked hard to preserve and digitize the five diaries, ensuring their long-term preservation.

Also speaking about the release of this book, Orlaith McBride, Director of the National Archives, said: “It is very exciting to have the opportunity to present the diaries of Michael Collins to a wider audience and to start a conversation on what they might mean and to contribute to what will undoubtedly be the collective effort to interpret this new source.

“Days in the Life, Reading the Michael Collins Diaries 1918-1922” is available in bookstores nationwide for €20. It is also available online at www.ria.ie.

A digital touch screen displaying the five newspapers will be available at the National Archives, Bishop Street, Dublin 8 in September. 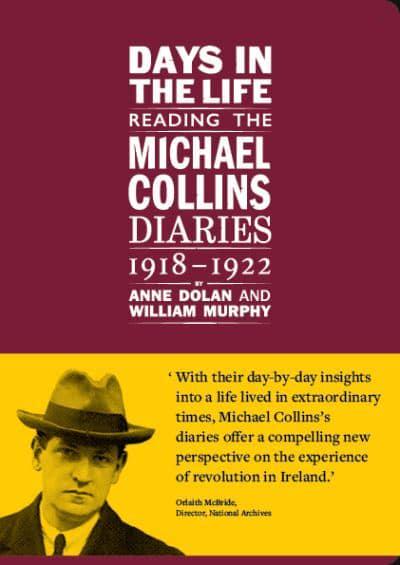