Brad Gray and his daughter Della Cowper-Gray were featured last night at the opening of their first joint exhibition, ‘A Hint of Grey’ at the Riverbank Arts Centre, an ‘incredibly talented father-daughter duo’. writing Brian Byrne.

Alexandra Rosiak, Venue Director at Riverbank, particularly congratulated Della (14) on her success in winning the Young Zurich portrait last year, with, coincidentally, a portrait of his father. “I think it’s safe to say that the apple doesn’t fall far from the tree when we look at Della’s stunning portraits,” she said. “The talent, the attention to detail and the emotional charge are clearly visible.”

She also spoke warmly of the work of Brad Gray, on this occasion the first time he exhibited at a local art center, although he has exhibited his work internationally for many years. “Personally, I’m a big fan of his works and their dreamlike nature is something I really, really appreciate and lose myself in.”

Of the 19 works on display at the Foyer Gallery in Riverbank, six are by Della. All are portraits, of his father, his sister Mae, a self-portrait, Ann Flanagan of Scoil Bhride, and two dogs. Her preferred medium is colored pencils on paper, and the works show her ability to work with detail, color subtleties and a keen sense of the range of tones between light and dark.

Brad Gray’s works are, he says himself, classified as dark surrealism, done in traditional oil paints “with a modern twist”. “They’re sometimes dark, sometimes cute, depending on the subject.” It also depends on the thought processes of the viewer, as Alexandra Rosiak has noted “a lot of humor, absurdity and symbolism” in the paintings. “Who, as it should be with art, are open to individual interpretation.”

His work is highly imaginative, usually in larger pieces having a wide variety of “characters” who, at first glance, do not appear to have any relationship to each other. They can be whimsical – like a little canary or a pink elephant (“Yes, they appear quite often, I don’t know why…”), scary monstrous like the cumbersome creature from the enchanted playing music to an intrigued young naked woman across the room, or a multi-species mix of non- and semi-humans and animals like those in the large format Light to exist. 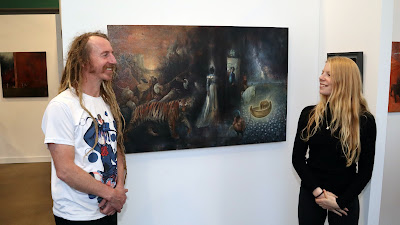 “That one started when I was in a temple in India. I was aware of this very dark space inside, and there was a point where people were worshipping. There was this silent presence…and at outside I was aware of the kind of frenetic chaos typical of India. The painting depicts this guy entering a world – what I was doing in this temple – having a glimpse of what was going on, but there had so much more to experience.

Della’s point of view is in the context of having always known her father as a very good artist whom she loves very much. “I’ve always admired him as an artist – he does so many detailed pieces, and that always made me want to put detail into my own work.” She loves the imaginative aspect of her father’s paintings and would love to follow with a similar imagination in hers. “But the commissions I receive and the competitions I participate in require realism. If anyone were to commission an imaginative piece, it would come from me.”

For Brad, having his daughter also as an artist “is good”. “Watching her work, at her age, she’s a lot better than me…more talent, more patience, and she’s just getting by. The way the world is now, everything’s going digital, I appreciate that “She uses traditional methods and I’m really impressed with what she does – it’s a slow, delicate process that builds her work with colored pencils.”

Alexandra Rosiak said she thinks there’s still a lot of creativity left to discover in Della. “I think we can surely expect to celebrate many more of his unique visual feats, and I wish Brad and Della every success in their respective artistic practices.”

‘A Hint of Grey’ lasts until April 30. Admission is free, but an appreciation of the imagination is required.